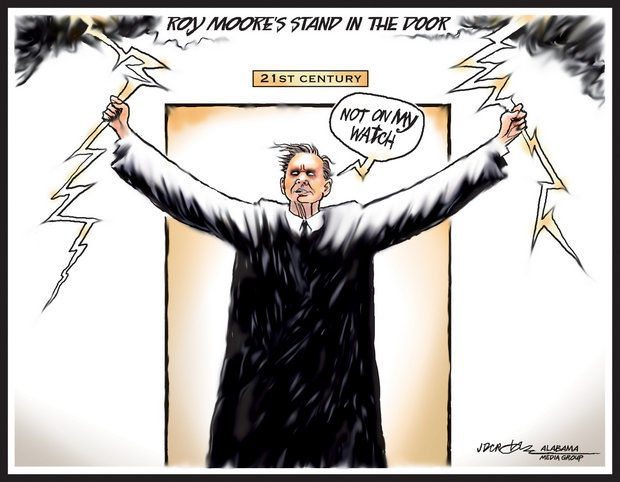 Without making a sweeping indictment of the entire population, it is not a stretch, or exaggeration, to state that Americans are not the smartest people on the planet. It is not that most Americans are inherently stupid, but there is a fairly large segment of the population that is ignorant; about nearly everything. In particular, Americans are ill-informed about of the U.S. Constitution and a growing number are deluded in thinking that the nation’s founding document is the Christian bible; not the Constitution. One would hope that the nation’s judges understand that the Constitution, and not the Christian bible, is the law of the land, but apparently that is not the case in Alabama.

Chief Justice of the Alabama Supreme Court, Roy Moore, has made headlines lately by elevating the bible over the Constitution in what seems to be a widely held opinion in Alabama. Because the bible says gays are an abomination to god, it drove Moore to order other state judges to ignore federal court rulings allowing courts to issue marriage licenses to same-sex couples. In Moore’s religious mind, as the Christian Chief Justice, and superior to the Constitution and federal courts, “he does not allow same sex marriage and he will never change his bible-based opinion.” Many pundits claim Moore is setting up a major challenge to the Constitution, but none of them mention that Moore’s challenge to the Constitution’s legitimacy is that it conflicts with the a Christian bible edict. According to Roy Moore, the Constitution and the Supremacy Clause is null and void because his religion says it is so.

Earlier in the week Moore was asked specifically to “explain what the Supremacy Clause of the Constitution means to you.” After reciting the Clause, he claimed that the state judiciary and federal judiciary are equal, which is not what the Constitution says, and then claimed that the Supreme Court has no “Constitutional authority “to reinvent the definition of marriage” because that is the bible’s authority. The federal courts are not reinventing the definition of marriage, they are upholding the Constitution’s guarantee of equal rights.

The federal courts do have Constitutional authority to rule that discrimination is unconstitutional. However, Moore does not see Alabama’s prohibition against same-sex marriage issue as about discrimination; it is about disobeying the bible edict against homosexuality. He said, “We don’t discriminate in Alabama. This is about marriage, and we don’t discriminate there either. All persons have the right to marry a person of the opposite sex” and according to him the Supreme Court cannot rule against that Alabama scriptural law.

If any American believes this issue is just about equal rights, they have not been paying attention. It is noteworthy that in 2003, Chief Justice Moore was removed from the bench for refusing to remove “a two-ton monument of the Ten Commandments he had installed in the state judicial building” because as a biblical fanatic, the Constitution is subservient to the bible. Moore is not alone and recently garnered ardent support from a Christian hate group in his contention that the bible supersedes the Constitution.

On Tuesday the United Dixie White Knights of the Ku Klux Klan issued a statement supporting Moore’s biblical war against the Constitution and same-sex marriage. The Klan statement said, “The Mississippi Klan salutes Alabama’s chief justice Roy Moore, for refusing to bow to the yoke of Federal tyranny. The Feds have no authority over individual States, and the fudgepackers from Hollywood and all major news networks are in shock that the good people from the heart of Dixie are resisting their Imperialist, Communist Homosexual agenda!”

The Klan’s Christian statement used the biblical (Leviticus 20:13) term and called same-sex marriage an “abomination” and called  “upon all Klansman and White Southern Nationalist to join Christians against tyrannical Federal judges.” The raging fanatics ended by marshaling Christian support to oppose “the Federal Government, by way of its foreign masters, that is set to push this abomination on the God fearing people of Alabama and send Jack Booted thugs to enforce marriage equality.” The Klan statement should disabuse any foolish idea that Moore’s or the Klan’s challenge is solely about the legitimacy of the Constitution, and more about imposing the evangelical fanaticism on Americans and nullifying Constitution as the law of the land.

In Alabama, and many southern biblical states, opposition to equal rights for same-sex couples is rampant. Despite what the Klan says, the only thing decent Americans are in shock over is that the evangelical bigots in “the heart of Dixie” are resisting the United States Constitution and its guarantee of equal rights for all Americans. The Moore-Klan types are also opposed to the Constitution’s protections against America becoming a Christian theocracy to rival Taliban-controlled Afghanistan and it is glaringly evident in the ease at which they disavow the Constitution.

Conservative Christians are obsessed with gays and same-sex marriage, something Jesus never mentioned, and yet no politician, lawyer, or judge at any level has the courage to cite the source of such bigotry, and opposition to the U.S. Constitution, is based on the bible. Maybe if the conversation was shifted slightly from “social conservatives” attempting to enforce discriminatory policies to “fanatical evangelicals” enforcing the Christian bible as the reason for vile religious laws, the public would wake up. For dog’s sake, even Roy Moore is smart enough to couch his opposition to gays in state’s rights, misreading of the Supremacy Clause or a moronic interpretation of the Constitution because those arguments work on stupid Southerners and ignorant Fox News devotees.

Even ignorant Americans would give pause if they knew the real issue in play is evangelical fanatics forcing Old Testament edicts on all Americans. Although Americans are not the smartest folks on Earth, they have seen the results of a government run by religious fanatics like the Taliban which is precisely where evangelicals want to take America but no-one is willing to admit it.