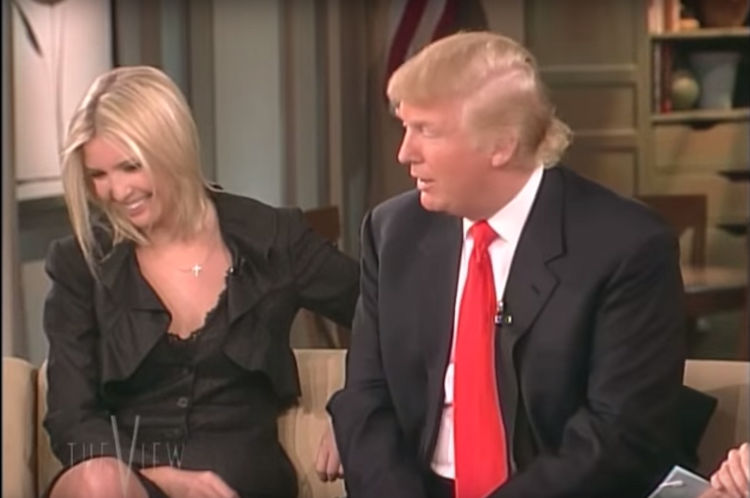 The world has been forced to come to terms with Donald Trump’s unapologetic misogyny with the revelation of a 2005 interview where he bragged about sexually assaulting women. Two years before, however, in 2003, Trump told Howard Stern,

“You know who’s one of the great beauties of the world, according to everybody. And I helped create her. Ivanka. My daughter, Ivanka. She’s six feet tall, she’s got the best body.”

A year after that, in September 2004, Howard Stern asked Trump if he could call Trump’s daughter Ivanka “a piece of ass.”

And yes, Trump said that was OK, that Stern could refer to his daughter as “a piece of ass.”

“By the way, your daughter,” said Stern.

It should come as no surprise then, in 2006, Trump appeared on Howard Stern and talked about Ivanka, who Stern said, “looks more voluptuous than ever.” Asked if Ivanka had gotten breast implants, Trump replied,

That same year, in March of 2006, Trump appeared on The View with Ivanka and talked about incest:

Asked what he would do if Playboy put Ivanka on the cover of the magazine – and remember, we now know Trump appeared in a couple of sex videos for Playboy – Trump answered, “It would be really disappointing.”

That was when he spoke those infamous words, that,

“I’ve said that if Ivanka weren’t my daughter perhaps I’d be dating her.”

Some things never change. On a 2013 episode of “Wendy,” Ivanka was asked, “What’s the biggest thing you have in common with your father?”

Ivanka: Either real estate or golf.

Trump: Well, I was going to say sex.

And that’s not the end of it. As recently as a September 2015 Rolling Stone article, Trump bragged,

“Yeah, she’s really something, and what a beauty, that one. If I weren’t happily married and, ya know, her father…”

Donald Trump’s history of misogyny does not only include women outside of his family, but his own daughter. He has made lewd sexual comments about her appearance, about her posing nude, his willingness to date her, and even to have sex with her.

Trump’s 2005 sex tape is not the exception, but given what we already knew of his history of misogyny, a completely unsurprising revelation. Trump thinks of women as objects created to satisfy his lusts, not as thinking, feeling beings.

Trump said his daughter is a “piece of ass.” As we have now seen, this puts her on a par with all women in his book. No number of denials and excuse making can erase the ugliness that is Donald Trump.