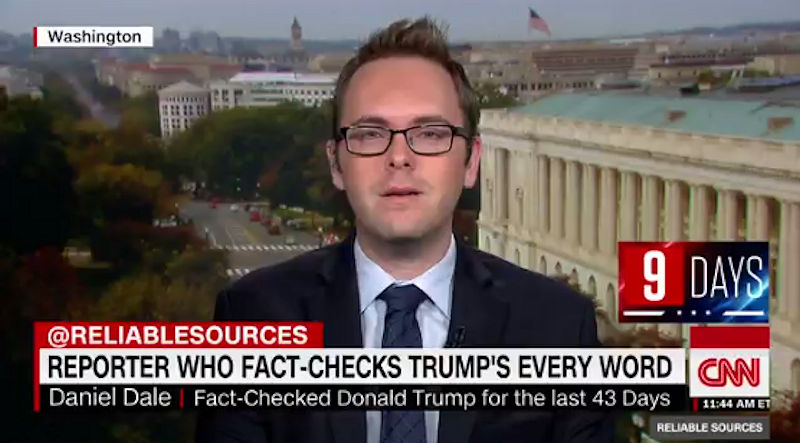 CNN’s Brian Stelter calls Donald Trump a “uniquely fact-challenged candidate,” which is a prelude to introducing Daniel Dale, Washington correspondent for the Toronto Star, who fact checks every single word Trump utters and tallies them up for his paper.

Dale says most fact-checkers look at two or three things Trump says, “meticulously fact-checks them and posts an article,” but “that doesn’t work when you have a candidate who is frequently saying 20 false things in a day, up to 37 on some days.”

Which, as Dale pointed out, followed “his record-tying 37 false claims on Monday,” not coincidentally, a day on which Trump called fact checkers “scum.”

"There is a massive imbalance in the frequency of dishonesty." @DDale8 says Trump lies a lot more than Clinton https://t.co/Kp6KvPNtmO

The mainstream media likes to play the false equivalence game but there is no equivalence between Trump and Clinton. As Dale told Stelter, “There is a massive imbalance in the frequency of dishonesty.” Trump, says Dale, “is not a normal political liar.”

For example, look at the presidential debates, in which Dale found 104 Trump false statements as opposed to 13 by Clinton.

Dale’s judgment is that “there is no comparison in her level of accuracy with her opponent.”

“He gets things wrong where there is no political advantage to be gained and in those cases, it is not clear whether he’s lying or confused or unwilling to take the time to learn the facts.”

This was Mark Cuban’s complaint, of course, that Trump has no interest in learning.

In the end, it matters less why Trump lies than that he does, especially since he is busily convincing his base that Hillary Clinton is the dishonest candidate. And it is working. This is a trope frequently repeated by Trump’s supporters. You can correct them as often as you want; it will have no effect.

The lie has taken hold – one of many – many more than you likely expected, and observational bias takes care of the rest. The Trump base is effectively lost to our shared reality, and as Dale tweeted last night,

“If Trump loses, the Smart Republican Excavation is going to have to involve some long, hard base re-education.”

Given the GOP’s history with facts, good luck with that.