*The following is an opinion column by R Muse

Even the most ardent conservative who believes the government exists solely to prevent them from becoming a billionaire and drive them into dire poverty likely rests comfortably at night knowing that government is protecting the nation’s security. Chief among the agencies protecting the nation is the expansive intelligence community (IC) consisting of, that we know, 16 separate agencies. Although it’s true the military is tasked with physically defending the nation’s interests at home and abroad, they are as dependent on data and information from the intelligence community as the White House that orders the military into action.

It is beyond comprehension that the intelligence community would ever distrust the White House to the extent that it withheld critical intelligence from the current occupant, but that is precisely what is happening and it signals that this nation is in a state of distress. When the intelligence community, all 16 entities, cannot trust the man serving as president or his trusted advisors to protect national secrets every American alive should be terrified and demand corrective action immediately, no matter what that action entails or no matter who is “corrected” out of their unwarranted positions of power.

As this column has stated several times before, and echoed by real American spies, “Declaring war on the spooks is always a bad idea,” and yet since before being officially inaugurated, Trump took the unprecedented step of attacking the IC including comparing them to “Nazis” because they were doing their jobs. Part of their jobs is briefing Trump daily, but he can’t even be bothered to pay attention to information crucial to America’s national security. Trump further antagonized the IC declaring that their reports and intel briefings were “ridiculous” and “unbelievable;” something he knew to be true because “I’m, like, a smart person. I don’t have to be told the same thing in the same words every single day for the next eight years.”

As an aside, Trump is dreaming if he thinks the IC will be talking to him for eight years; unless it is waterboarding him daily until he confesses that he is a know-nothing con man financially indebted to Russian crime bosses who bailed him out of bankruptcy.

It was particularly stupid for Trump to assail the IC while they were investigating what they already knew was a “longtime relationship with Moscow.” As former director of both the Central Intelligence Agency (CIA) and National Security Agency (NSA) Mike Hayden said while sharing the IC’s outrage at “Trump’s blowing them off with insults: To have an assessment dismissed, frankly, because it was unpleasant? That’s just not acceptable.“

Mr. Hayden doesn’t tell the half of it; it is more than just “dismissing” intelligence assessments that are factual and thus “unpleasant” to the Trump. In most cases Trump doesn’t care about hearing any intelligence crucial to protecting national security any more than he does allowing his treasonous acolytes to share that crucial intelligence with his connections at the Kremlin. In fact, it is precisely those “connections” that are the reason the IC is withholding important intelligence from the “so-called” commander in chief; because they are confident Russian president and former KGB (spy) officer Vladimir Putin has ears and eyes in the Trump White House situation room. Trump’s cozy relationship with the Kremlin has more than the United States’ IC concerned enough to withhold valuable information.

It is noteworthy that the IC’s concerns are not solely due to Trump’s NSA director’s very friendly relationship with Moscow. There is a very nifty timeline of the Trump-Russia connection compiled by Business Insider (BI)that explains exactly why the IC is protecting America by not sharing critical intel with the White House. Trump’s relationship with Vladimir Putin and Moscow did not begin on January 20, 2017 and the “BI” article includes Trump’s inner circle’s connections to the Russians. 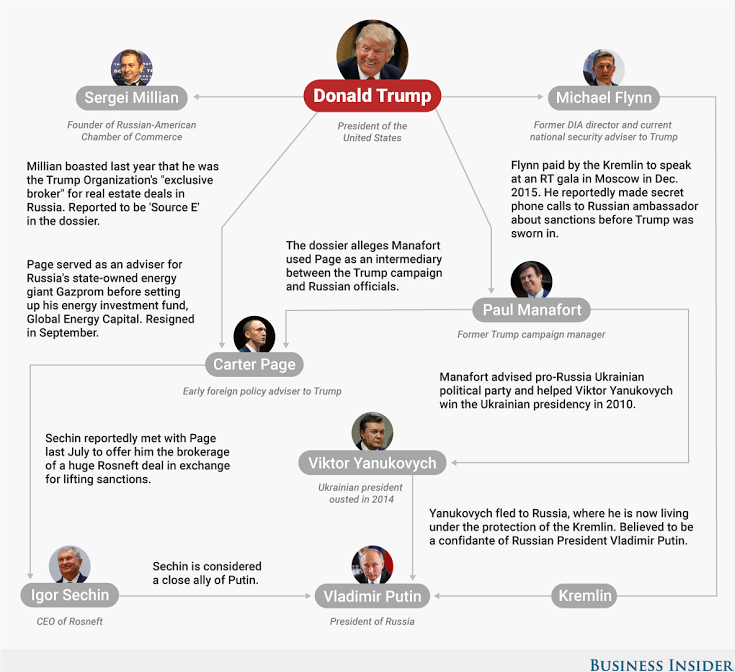 What is absolutely stunning is that the Trump campaign, and the Trump’s, connections to Moscow were relatively common knowledge long before election day; the intelligence community knew about them even longer still. The difference now is that Trump, and some say Putin, is in the White House. A frightening proposition that has the intelligence community concerned enough to withhold crucial intelligence from the man with access to the nuclear codes; except when the guy with the “nuclear football” is having to pose for pictures with members of Trump’s club.

The fact that the intelligence community is not revealing its information to the White House because Trump’s administration cannot be trusted is beyond the pale and a matter of national security. It verifies to America’s allies what they already know that Trump is not only incompetent on myriad levels, but that he is far too connected to a hostile foreign power to be trusted with intelligence vital to the security of the entire world.

What should be obvious to anyone who is not a Trump zealot is that if the American intelligence community cannot trust man claiming the presidency of the United States of America, then no ally, trading partner or American citizen can possibly trust Donald J. Trump or anyone remotely connected to his administration. And when a nation’s people cannot trust the man in the White House over his connections to a hostile foreign power, it is certain that the nation is in distress.

**The above article includes reports with commentary by R Muse**