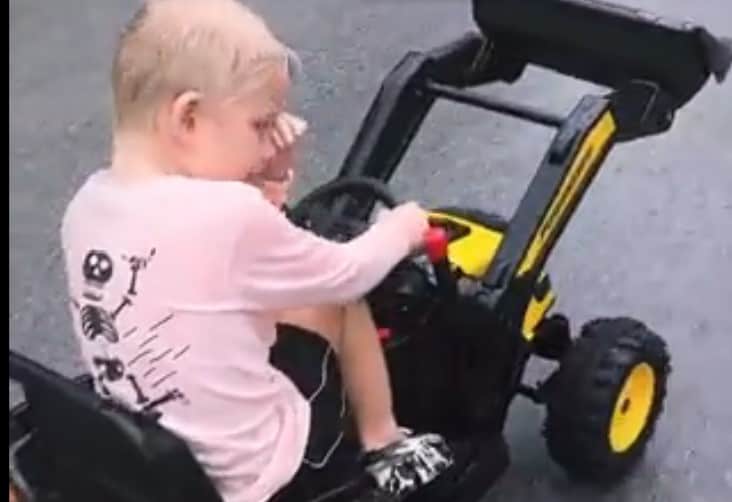 This is, without a doubt, one of the most disturbing “MAGA commercials” displaying the idea of toughness one’s ever seen. Lara and Eric Trump live in Jupiter, Florida, which will not be hit hard by hurricane Ian. But Ian is big enough that its red circle encompasses the east coast of Floria such that it’s getting torrential rain and some serious blustery winds. Lara Trump saw an opportunity. Lara Trump took her son out, in just a t-shirt, to ride his powered car toy in the rain. This is, apparently, a “character building exercise.”

First, notice how hard the torrential rain falls and blows, as you also notice that the very, very young son is in tears, and the rain appears to be hurting his face. It looks like child abuse, nothing of character:

Lara Trump and son during the storm, in what she calls a “character building” exercise. pic.twitter.com/gHaBChXBX2

There are other character opportunities that reflect the values of most well-developed adults. There is the chance to say, “You must respect nature and know that there are times that it is dangerous to be outside. Rain can form pools on the road that can be unsafe and blustery winds often make branches fall, which could hurt or kill anyone beneath one. So there are times when, even if you want to go outside, you respect that nature can be dangerous.”

Discernment and education build character. Scaring a child while telling him it’ll make him “tough” doesn’t build character so much as it demonstrates that “toughness” is the most important character trait to his family. Another important character-building opportunity would be going out and collecting fallen branches after the storm has passed, especially for elderly neighbors. Showing compassion and a willingness to do one’s part in keeping people safe is critical to one’s character.