Last May 15, the House passed a sweeping $3 trillion relief package that would provide another round of stimulus checks for Americans, extend unemployment benefits, broaden the social safety net, and, of great importance, provide relief funding to states. read more The impatient discussion about when America can “re-open” for business has not only often proceeded, on the Republican side, with willful ignorance of informed medical perspectives, but it has also tended to pose a dangerously ignorant and unimaginative false choice to Americans: either save lives or save our economy and way of life. read more Nearly one third  of Americans who rent their homes, or 13. 4 million people, did not pay their rent between April 1 and April 5 this month.

Requests from homeowners to delay making their monthly mortgage payments surged by over 2,000 percent between March 16 and March 30. read more 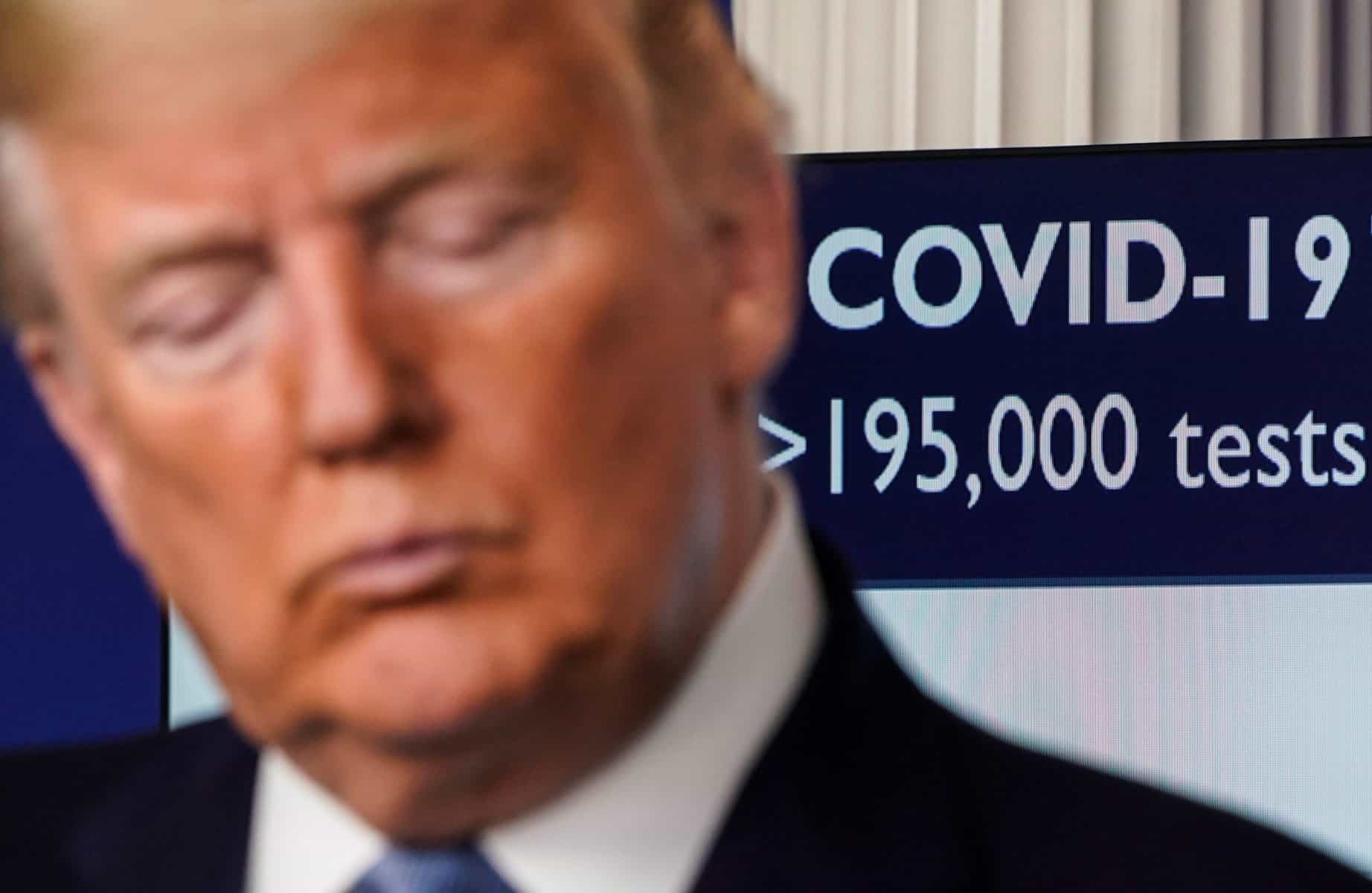 Donald Trump has repeatedly expressed an impatience to send Americans back to work and re-open all the businesses currently closed.

“We can’t let the cure be worse than the problem,” he has said repeatedly.

With this new favorite mantra of his, he is pitting saving people’s lives against saving the economy, coming down in favor of the latter. He argues that an economic depression will in the end destroy more lives than the virus. His opponents argue that saving the economy is contingent on saving lives and stemming the pandemic.

Either way, both sides are interested in saving “the” economy, which makes the choice a false one.

To understand why the choice is a false one, we have to stop saying “the economy,” as if there’s only one kind of economy we can create, and refer specifically to the U.S. capitalist economy.

*As New York Governor Andrew Cuomo has stressed, private hospitals, geared toward making profits, are unprepared to treat the many stricken with the coronavirus because, operating according to capitalist models of business efficiency, they do not allow for excess beds—or “excess capacity’—because that eats into profit. https://www.politicususa.com/2020/03/21/opinion-coronavirus-highlights-inhumanity-and-inefficiency-of-for-profit-economy.html

*Also, following capitalism’s preferred “just-in-time” inventory management process, hospitals do not stockpile the equipment—masks, gloves, ventilators—necessary to handle the volume of patients such a crisis brings to them. The private sector cannot handle the nation’s public health needs, as they are designed to produce profit, not meet human need. And the global supply chain, operating on capitalism’s push for lean production, cannot now mobilize to meet need given that workers all over are impacted by the virus.

*Companies that do produce the necessary equipment are stalling in distributing these goods needed to immediately save lives, holding out for the highest bidder as state and federal governments compete against one another. The capitalist “ethos” of competition doesn’t make us better; it costs lives in the name of the producing profit.

And some other key historical moments also arguably demonstrate the hostility of capitalism to human life.

First, let’s recognize that what caused this economic crisis was overproduction. We didn’t have too little as a country; we had too much! Thus, with markets glutted with more products than people needed or could afford to buy beyond need, prices plummeted in accordance with the capitalist laws of supply and demand, and factories and industries laid people off. Consequently, people didn’t have money to buy the basic necessities. Hence, the masses, starving as they were, hit the breadlines, as we all know from the familiar images of the Depression passed down to us.

So, to put the absurdity of this situation into relief, at this moment in history, the logic of the capitalist system created a scenario in which the mass of American citizens was starving and in need amidst conditions of material abundance.

The sane mind might find this description of a crisis a bit off kilter. Should having abundant resources available to us really constitute a crisis? It seems we need to question the efficacy of a system that transforms conditions of material abundance into human want and misery.

How did the capitalist imagination seek to resolve the crisis? Well, in order to restore pricing and create conditions to make more production necessary, the task was to eliminate abundance by burning crops, pouring milk down sewers, slaughtering livestock, and so forth. In short, the answer was to get the capitalist economy-whose internal dynamics inevitably generated the crisis to begin with-up and running again, leaving us to wait for the next inevitable cyclical crisis, such as our most recent Great Recession.

As an example of what I’m talking about, take the foreclosure crisis that largely caused our latest Great Recession. Our leaders, our great minds, imprisoned by the limitations of the capitalist imagination, sought to solve the problem and save the system from total collapse by bailing out the banks from the toxic mortgages they issued which were leaving them high and dry because borrowers could not repay them.

But while the banks were bailed out, the “homeowners” were still foreclosed upon and evicted. Homes were left empty. An abundance of houses flooded the market, driving down property values for those still in their home. Millions more Americans thus found themselves underwater in their mortgages, witnessing their chief investment and wealth asset disappear. Gazillions in wealth were lost, destroying the housing market and eroding the financial wherewithal of the consumer (whose prowess accounts for more than 2/3 of the economy). But the banks were saved. The system was saved.

How might the problem have been approached the problem differently? Putting human need first and envisioning an economy that served people as opposed to one in which people serve the economy-would have sought first to keep people housed.

Imagine if instead of prioritizing the banks, our leaders had sought to save the system by bailing out homeowners? If the trillions of dollars had been dispensed to those with unpaid mortgages instead of the banks? To those people could have paid off their mortgages, made good on the “toxic loans,” and arguably have bailed out the banks while staying in their homes? It would have prevented the destruction of the housing market and the death spiral of the overall economy.

Capitalism won’t save people. They need to be saved from it.

We need to approach the governing and the crafting of economic policy with a clearer vision of what the objective of a government and a political economy should be. And that is to serve the people and organize the production and distribution of resources to most efficiently serve human need, first and foremost.

As talk of a looming recession increases in volume, looking back to the Great Recession in 2008 to assess the effectiveness of how we as a nation responded to it seems like a good idea.

It’s always healthy to learn from one’s mistakes and process the past, right? read more To perhaps an unprecedented degree in the United States, we are witnessing an increasingly serious debate playing out about the relative merits of capitalism and socialism. Trump seems to believe – or at least want you to believe – that this rosy economic picture came out of nowhere, thanks to him.

"It's like a guy built a house and sold it to someone, and that person walked in and turned the lights on is like, 'Look at the house I built.'" Republicans in the House of Representatives are about to dismantle financial reforms enacted by President Obama after the Great Recession. "Discussion of economic policy is now monopolized by people who have been wrong about everything, have learned nothing from the experience" When Donald Trump takes office next month, he will be inheriting a country in much better shape than when the current president took office in 2009. For that, he should be saying, "Thanks, Obama."

The percentage of middle-class households dropped in every state in the Union between 2000 and 2013, along with median income

Under attack and exposed, the Kochs have gone on the offensive, with their minions singing paeans of praise for our "benevolent" overlords

Instead of changing course and helping the majority of the population, Republicans still propose heaping wealth on the rich and increasing taxes on the bottom 90% of the population to complete the utter destruction of middle income earners. According to yet another report they are succeeding beyond their wildest dreams.

Could the answer to the ongoing economic woes of the country be a forgiveness of household debt? At least one economist thinks so.

A new CNN/Opinion Dynamics poll released today should provide some hope to Democrats and cause a bit of concern for the GOP ahead of the mid term elections. The poll revealed that a majority of Americans (53%) blame George W. Bush and the GOP not Barack Obama and the Democrats for the nation's current economic problems.