Last May, the conservative group Michigan United for Liberty organized protests in the state capitol against Governor Gretchen Whitmer’s stay-at-home orders.  While the group, composed of roughly 8,000 members, had already formalized its complaint against the orders in a law suit, the protest provided a forum for a defiant public expression against what the group sees as a gross violation of people’s constitutional freedoms. read more Anyone who endures the Trump presidency understands why there’s a minimum age qualification to be president.  Trump proved, however, that chronological age doesn’t necessarily reflect the maturity that one needs to make rational decisions as the president of the United States.  Trump’s outbursts are more like that of a two-year-old having a tantrum than of a grown man in control of his emotions. read more Donald Trump has a legal responsibility to wear a face covering when he visits Michigan on Tuesday, according to the state’s attorney general. The President has not worn a mask in public yet.

Michigan AG Dana Nessel wrote a letter to President Trump on Wednesday telling him he had to wear a face covering during his visit to Ford car plant this week.

“Michigan has been hit especially hard by the virus, with more than 50,000 confirmed cases and 5,000 deaths,” Nessel’s letter said.

“Anyone who has potentially been recently exposed, including the President of the United States, has not only a legal responsibility, but also a social and moral responsibility, to take reasonable precautions to prevent further spread of the virus,” she wrote.

Whitmer’s order also requires “that any individual able to medically tolerate a facial covering wear one when in any enclosed public space.”

Ahead of President Trump’s planned visit to tour a Ford Motor Company plant, @MIAttyGen @dananessel has sent an open letter asking that he respect the hard work and safety of our automakers by wearing a face covering during his visit. ➡️https://t.co/UfjfGN01tj pic.twitter.com/FhCtqYp8wN read more One on level, the coronavirus pandemic holds out the potential to shift America’s dominant cultural mentality to finally re-think—indeed come to terms with—how our political, economic, and moral systems value the work on which our lives most depend. read more 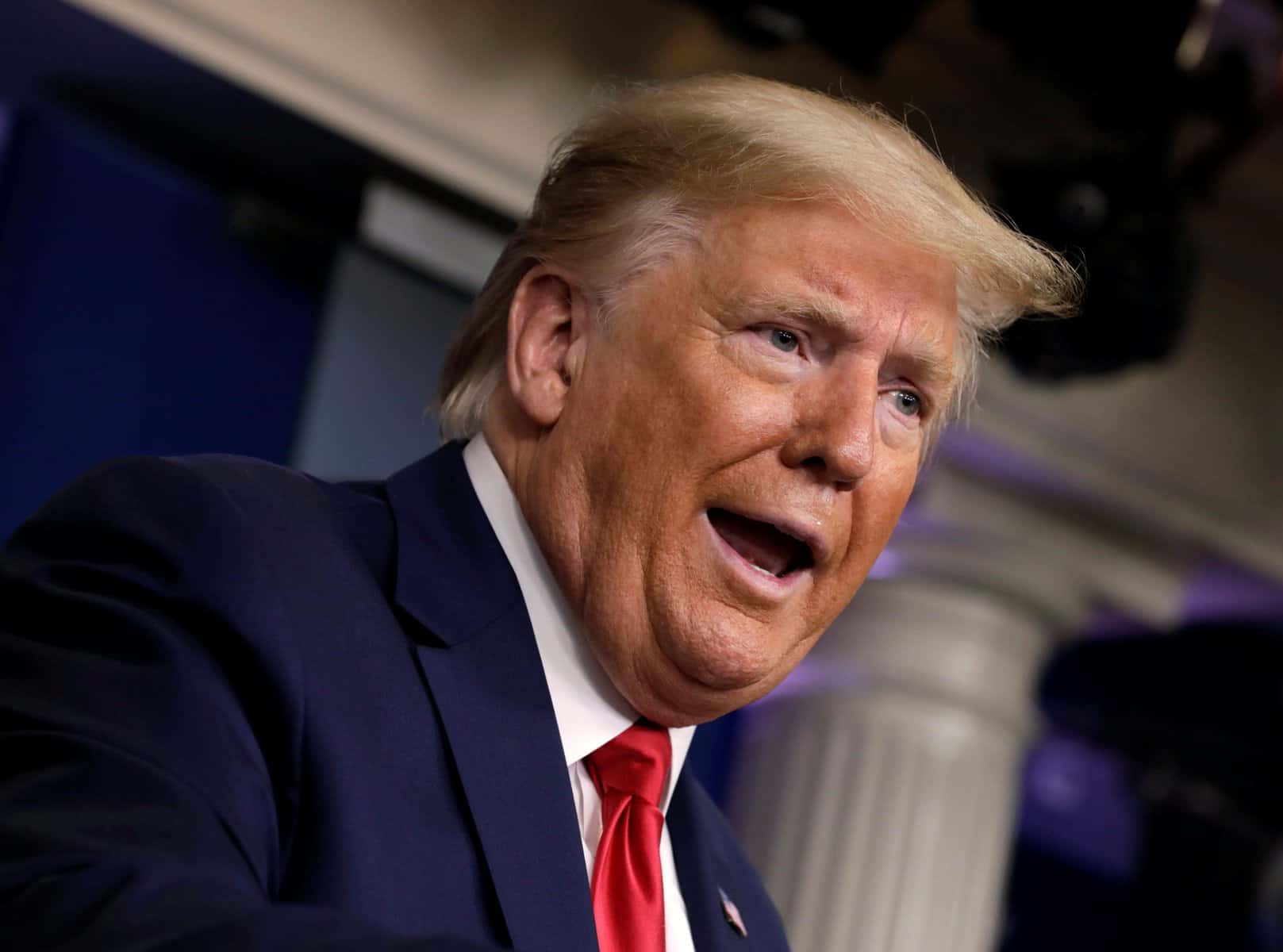 “The Governor of Michigan should give a little, and put out the fire,” he wrote. “There are very good people, but they are angry. They want their lives back again, safely! See them, talk to them, make a deal.”

The Governor of Michigan should give a little, and put out the fire. These are very good people, but they are angry. They want their lives back again, safely! See them, talk to them, make a deal.

Trump has in the past criticized Whitmer for issuing strict stay-at-home guidelines. Protesters yesterday were barred from getting onto the House floor by state police and sergeants-at-arms. Whitmer had previously extended her state’s stay-at-home order to May 15. Michigan Governor Gretchen Whitmer has announced a new program to provide a tuition-free college or technical education to essential workers who do not have a degree.

The program will help the state meet its goal to increase the number of working-age adults with a technical certificate or college degree from 45 percent to 60 percent by 2030. Whitmer will also expand Michigan’s Workshare Program to allow employers to reduce employee hours to receive weekly unemployment insurance benefits as well as the $600 unemployment assistance from the federal government.

“The Futures for Frontliners program is our way of saying ‘thank you’ to those who have risked their lives on the front lines of this crisis. This program will ensure tuition-free college opportunities and give these dedicated Michiganders an opportunity to earn a technical certificate, associate degree or even a bachelor’s degree,” Whitmer said. “I want to assure all of our workers we will never forget those of you who stepped up and sacrificed their own health during this crisis. You’re the reason we’re going to get through this.”

“No Michigander should have to worry about how to feed their family or pay rent during a crisis. And no Michigander should be scared to go to work,” Whitmer continued. “From the beginning, my team and I have been working around the clock to solve those problems for working families. And I will continue to fight for our working people long after this crisis is over.”

The program was inspired by the GI bill after World War II that provides educational assistance to servicemembers, veterans, and their dependents. Congressman Justin Amash may be seriously considering running for president in 2020. The former Republican’s recent tweets have fueled speculation about his intentions.

The Michigan representative posted a tweet on Monday arguing that voters who believed like he did but he didn’t approve of President Donald Trump should look elsewhere.

Americans who believe in limited government deserve another option. https://t.co/c7P2vOTyOe

Another user replied to his tweet urging Amash to run for president. The Congressman replied “Thanks. I’m looking at it closely this week.”

Amash left the Republican Party and is a strong critic of the President. He

Michigan Governor Gretchen Whitmer (D) says her state is not getting urgently needed medical supplies to battle the coronavirus pandemic because contractors are first sending supplies to the federal government.

“Well, we’ve entered into a number of contracts, and as we get closer to the date when shipments are supposed to come in, they are getting canceled — getting delayed,” Whitmer said in a CNN interview, adding that she learned shipments are going “first to the federal government.”

“I know Michigan is not alone. I saw Gov. Charlie Baker, Republican from Massachusetts, essentially say the same thing. Same thing with Mayor Garcetti out in Los Angeles. This is an issue we are confronting as a nation, where we are bidding against one another, where we are struggling to grab every PPE (personal protective equipment) we can get our hands on,” she said.

Michigan Gov. Gretchen Whitmer urges unity after President Trump criticized her for asking the federal government for more help fighting the coronavirus: "We need to put political differences aside and focus on the real enemy. And that's the virus" https://t.co/z4wOUA0tpo pic.twitter.com/lX5WgJliml read more

Gov. Gretchen Whitmer (D) said that the Trump administration told vendors not to send needed ventilators to her state of Michigan. President Donald Trump took to Twitter to lash out at the respective governors of New York and Michigan as the death toll attributed to the coronavirus pandemic continues to rise and as his administration faces blistering criticism for its response.

The president accused Governor Andrew Cuomo (D-N.Y.) of politicizing the growing crisis, suggesting that a wholesale federal policy is not appropriate given that some states are more overwhelmed with cases than others. The president pointed to differences in New York, which he referred to as a “hotspot,” and West Virginia, which has yet to report a single case, though his argument ignores a sobering reality as the nation grapples with a testing shortage that has led many not to get tested for the virus or otherwise complicated results.

Cuomo wants “all states to be treated the same.” But all states aren’t the same. Some are being hit hard by the Chinese Virus, some are being hit practically not at all. New York is a very big “hotspot”, West Virginia has, thus far, zero cases. Andrew, keep politics out of it…. read more Republicans in several states are attempting to rush through last-ditch laws that would take away power from Democratic governors. At the time time, they seek to pass lame-duck laws to advance their own right-wing agendas.

Braced for a new era of divided government, lame-duck Republicans who have long controlled two upper Midwest states are priming last-ditch laws to advance their conservative agenda or to weaken the influence of Democratic governors-elect: https://t.co/MS8vPrDiLr read more The 2018 midterm elections will be remembered as The Year of the Woman in more ways than one.

Certainly a major factor is that record numbers of women voters in urban and suburban areas gave control of the House of Representatives to the Democrats.

Also, on Tuesday, 185 Democratic women and 52 Republican women ran for House seats, a record number of candidates. And there were 23 female Senate candidates, 15 Democrats and eight Republicans. (This is an addition to the ten women senators who did not run this year.)

And on top of all of that, a record number of women will be going to Congress after Tuesday’s elections.

“The next Congress will have a record-breaking number of women. The legislature just surpassed its previous record of 107 women or 20% female representation.”

The next Congress will have a record-breaking number of women.

The legislature just surpassed its previous record of 107 women or 20% female representation https://t.co/G3Ns3LjWH2

Women won some key governor races as well, in a few cases pulling off big surprises.

Some victories by women were expected, such as Tennessee Republican Rep. Marsha Blackburn becoming the first woman to win a seat in the Senate in that state.

It was also expected that many Democratic women won House seats that helped their party regain control of the House of Representatives.

JUST IN: Dem Abby Finkenauer will become one of the youngest members of the House after flipping GOP seat in Iowa https://t.co/YX4NTqywQ6 pic.twitter.com/Ux0d8Gu2Hw read more

On Wednesday, the Michigan State Senate passed a bill that requires a woman to purchase separate health insurance prior to getting an abortion.