With a joint budget committee mandated in the deal to reopen the government and raise the debt ceiling, the fiscal scolds at Fix The Debt are again demanding ‘reforms’ to Social Security and Medicare. Their entire argument is based on a myth.

The U.S. population is aging. In part that’s because families are having fewer children. It’s also because more Americans are living longer. Put those two facts together and the Administration on Aging at the Department of Health and Human services estimates that the percentage of Americans over age 65 will rise to 19% by the year 2030 from the current 13.5%. Urban Institute charted Census Bureau data to make that change clearer:

In fiscal terms, our aging population will increase the costs of caring for seniors by roughly half by the year 2040, and that increase may be even more depending on how we pay for seniors’ retirement and health care.

“Americans are becoming less prepared for retirement, not more”

Many seniors’ primary retirement income comes from Social Security, a non-profit, government-managed annuity with current administrative costs of less than 1%. By comparison, privately-managed 401(k) plans have higher administrative costs as well as the risk that poor investments or a market downturn will empty a senior’s account. Those risks and costs are higher still if mutual fund managers are allowed to include their own funds in clients’ 401(k) menu. In assessing these hidden costs, law professor James Kwak writes:

Even if we solve the more-publicized problems with [direct contribution] plans – under-saving, pre-retirement leakage, etc. – they will still suffer from this constant drain of asset management fees. The UPenn Journal of Business Law recently published my (first!) law review article, which proposes a relatively far-reaching solution: Reinterpreting existing law to impose a strong presumption in favor of low-cost index funds for tax-advantaged, employer-sponsored DC plans, including 401(k)s. Even if you don’t agree with that solution, something needs to be done.

Because with each passing year, Americans are becoming less prepared for retirement, not more.

“This enormous disparity should long ago have triggered inquiries” 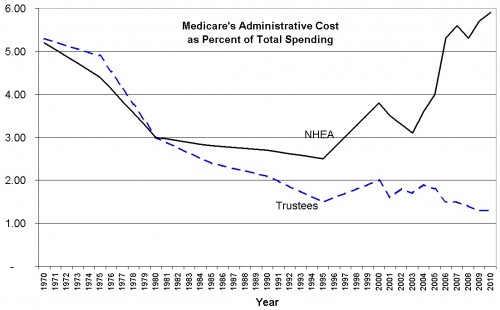 As Kip Sullivan of the Physicians for a National Health Program concluded in his study on Medicare costs:

This enormous disparity between two measures that used to be almost identical should long ago have triggered inquiries within Congress and the US health policy community as to whether the higher administrative costs associated with the growing privatization of Medicare are justified.

“There’s been a lot of demagoguery on both sides”

As things stand now, seniors primarily rely on very low-cost, government-managed annuity and health insurance programs. Of course, as our population ages, the cost of those programs will increase. And the good folks at Fix The Debt want to make sure you know about of that “long-term debt” problem:

Rising debt will slow economic growth. Researchers have found that once debt reaches certain thresholds, some of which we have already passed, the economy grows notably slower. A slower economy will reduce our standard of living.

Ultimately, we will face an economic crisis if we don’t change course – perhaps along the lines of what several European countries have experienced recently.

Higher debt means leaving the next generation saddled with it, reducing their budget flexibility and the ability of the United States to respond to crises in the future – including economic, natural, and security emergencies.

By the reckoning of Fix The Debt, and most Republicans, if we reduce, privatize, or eliminate Social Security and Medicare then the costs of caring for seniors just go away. If it’s not on the federal budget, by their reasoning, it doesn’t exist. And that is the fundamental myth in their argument about our “long-term debt.”

Those costs won’t just go away. Seniors will still be living longer and increasing as a percentage of our population, and someone will have to pay for their retirement and health care. If they’ve moved their savings from Social Security to 401(k)s, then the higher administrative costs mean they’ll have to put aside even more to get the same annuity benefit when they retire. If we turn Medicare into Obamacare, then seniors’ premiums will skyrocket as private insurers impose higher administrative costs. If seniors can’t afford those, then their working-age children will have to pick up the difference. And if their children can’t afford it, then seniors will have to turn to charity.

Fix The Debt’s frantic warnings about “long-term debt” only matter if we assume that seniors who can’t afford the higher-cost, privately-managed annuities and health insurance – what Fix The Debt proposes to replace Social Security and Medicare – will just die.

If we assume those seniors will live, the question shifts from “long-term debt” to “most cost-efficient care” … and the administrative cost data show that we should rely more on government-managed programs like Social Security and Medicare.

It turns out Fix The Debt steering committee member Jim Nussle was correct when he told The New Republic‘s Alec MacGillis: “There’s been a lot of demagoguery on both sides.”

At least he was correct … if his statement includes his own group.