Will  Senator Elizabeth Warren’s  political economic populist movement change US economics and politics now and in the future?

It was her Senate floor speech about why government matters may have been one of the final impetus, along with the on-going Republican blocking of President Obama’s judicial and agency nominees for the change in the Senate filibuster rules. Her speech is the best explanation of what government is and should be doing, as well as a scolding of the Senate’s “business as usual” approach. Senate Republicans, you can’t say the Senior Senator from Massachusetts didn’t warn you.

Elizabeth Warren is the voice of the middle and lower classes, those who believe the system is rigged against them. The voice of all those who feel frustrated with, but powerless to change the government of self-imposed inaction, unjustifiable fiscal limits protestations, and protection of the wealthiest. Senator Warren is very intelligent, well-spoken and intense. She is one of the leaders of the new economic populist movement in the Senate, along with Senators Sherrod Brown, Bernie Sanders, Sheldon Whitehouse and Jeff Merkley.  Newly elected Cory Booker, with his advocacy of community development  and anti-consumerism, makes this a strong contingent in the Senate.

These charts explain the growing economic inequality where the top 10% of Americans have 73% of all net worth and the top 1% have 70 times the net worth of the lower classes: 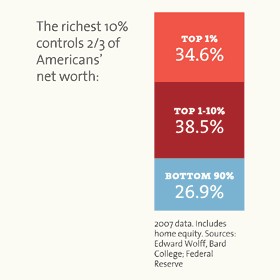 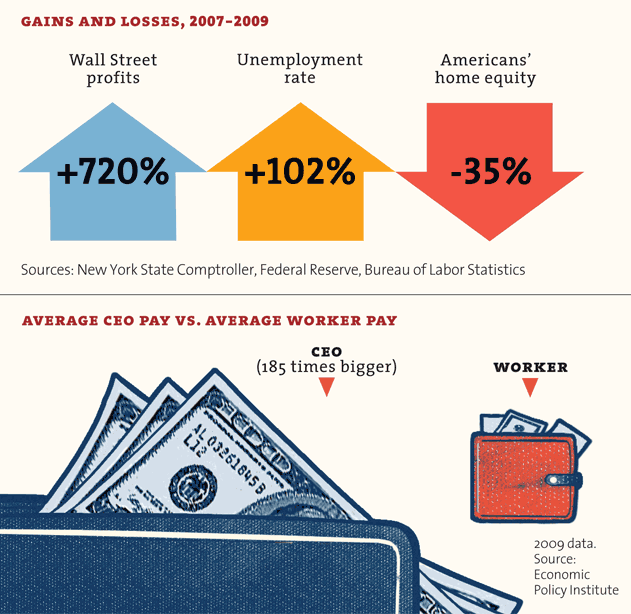 1/3 of Americans Consider Themselves Lower Class

What are the ideas of the new economic populism?

• Increasing the minimum wage, perhaps up to $15 to $22 per hour
• Protecting existing Social Security and Medicare benefits and increasing them
• Expanding the scope of the Affordable Health Care Act, potentially leading to having a one-payer system
• Putting more controls on banks and financial institutions through new Glass-Stengall like legislation
• Changing the current federal college student loan program financing program, reducing the existing amount of student debt, driving down college tuition rates and increasing the number of Pell Grants
• Overhauling the existing affordable housing programs to make housing more affordable to the middle and lower classes.

Most importantly, changing the existing tax code so that the very wealthy and corporations pay their fair share in taxes to pay for the new initiatives.

To win election, Senator Warren was involved in the most expensive Senate race ever. Over $78 million was spent in her defeat of former Massachusetts Senator Scott Brown, What was remarkable that in the era of big money political contributors, nearly half of her campaign contributions, $22 million, came from small individual donors. Nor is it a surprise that her opponent received approximately 25% of his campaign contributions from the financial and insurance industries that Senator Warren wants to regulate and reform. This race helped improve her campaign style and toughened her against political attacks.

Senator Warren, despite all the media furor, states that she will not run for the 2016 Democratic Presidential nomination. While she has become increasingly comfortable in the public spotlight, she is still a relative political neophyte. While she has financial backers, she does not have the extensive financial backing that Hillary Clinton does. But Senator Warren’s economic populism ideas are resonating with the public, especially the Democrats’ progressive/liberal base.

John Nichols, Washington correspondent for The Nation and associate editor for The Capitol Times writes:

But Warren is not just a fall-back contender—or even a progressive alternative to the centrist Clinton. She is more than just a prospective candidate. She is a purveyor of ideas, whether advanced on the campaign trail or in the Senate, that really do make her what Politico suggests: “Wall Street’s Nightmare.”

What is appealing about the prospect of a Warren bid—against Clinton or in a race without Clinton—is the determination of the Massachusetts senator to reach far beyond the traditional space filled by centrist and even liberal Democrats. She goes to where Bill de Blasio went in a progressive populist bid that swept him into New York’s mayoralty with an almost fifty-point margin of victory.

Warren’s message, in the Senate and beyond, is that Democrats can and should have an economic agenda that speaks to the great mass of Americans.”

In light of her popularity and influence, it will be interesting to see which 2014 Senate campaigns will be asking Elizabeth Warren’s support and appearances. Will female Senate candidates in close races like Alison Lundergren Grimes, Kay Hagan and Michelle Nunn want her help? Will male Senators in tossup races, like Mark Pryor and Mark Begich, benefit from her campaigning? Will she campaign against a potential 2016 presidential rival  (and current colleague) like Lindsey Graham? What effect, if any, would she have on electing a House Democratic majority?

It will be interesting to watch whether Wendy Davis asks Warren to campaign for her in the close Texas gubernatorial race and whether Warren would draw the large crowds she has elsewhere. Student Elizabeth Warren got her undergraduate degree at University of Houston and Professor Warren taught at the University of Texas.

Maybe, just maybe, the presence of Elizabeth Warren and the new economic populism movement forces Hillary Clinton to move her views from centrist/slightly left to more liberal/progressive, especially economically. Maybe, just maybe, having a new political leader in the Senate spurs the current leader, Harry Reid, to step down. Maybe, just maybe, the combination of the first female President and first female Senate Majority Leader, possibly with a new progressive Speaker of the House, would be able to reverse the direction of and damage done by the old boys’ club that has led to the partisan gridlock and visceral hate manifest in current Washington D.C. politics.